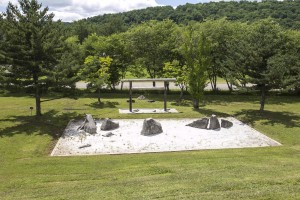 The “Sea of Tranquility”, a re-created art masterpiece of the Orient, is one of the unusual sites to see at the Nannen Arboretum. It is a replica of a 500 year-old garden in Kyoto, Japan. The original Ryoanji Temple Stone Garden was built in Kyoto, Japan at the end of the 15th century by Zen priests. The Ryoanji Temple Stone Garden is an abstract garden of stone and ground granite. It has neither tree nor bush. Its level area is a bed of finely crushed stone, skillfully ripple-raked to suggest the sea. Since it would be impossible to borrow the original garden from Japan as an art museum might borrow great paintings for a special exhibition, it was concluded that this phase of Japanese culture could best be portrayed by building a replica.

The first replica in this country was built at the Brooklyn Botanical Gardens in the 1960’s. John Ploetz, the developer of the Nannen Arboretum, was in charge of planting trees behind it. He was so impressed by the stone garden’s simplicity that he incorporated a smaller replica in the Nannen Arboretum in 1980. The garden is meant to be a meditation and contemplation garden. Granite grit is used as a ground cover because it is heavier than sand and the ripple raking resembles water. Seen from the trail above the garden, you see nine rocks arranged in threes and singles. The Zen priests named each with a religious trend, ours are Americanized: Faith, Hope and Love; three rocks of Trinity; Rock of Ages; Serenity; and Unity all standing in the “Sea of Tranquility”. The large stones represent islands and were mined in Akron, New York. The Torii Gate behind the garden is a Japanese Gateway to Heaven. The abstract picture created is intended to encourage contemplation and quiet meditation and to stimulate the observer’s imagination.

No Japanese Garden would be complete without water. Up the hill from the “Sea of Tranquility” is Lake Nipponica featuring large rocks standing several feet out of the water. As you walk along the trail surrounding the lake, the rocks create a fascinating change of scenery across the lake. The Amano Hashidate Bridge (bridge in heaven) crosses the west end of Lake Nipponica. The two upright supports are Torii Gates. The railings are painted red just as they were in Japan. Weeping willow trees in back of the bridge remind one of ceramic willowware china of ages past. While standing on Amano Hashidate Bridge, you get a beautiful view across Lake Nipponica plus a good view of the Ellicottville ski slopes. The reflection of the bridge and red railings is a sight to see viewed from the east end of Lake Nipponica.

To compare the garden of Ryoanji with traditional gardens in the West would be like comparing abstract painting with traditional art—or contemporary symphonic music with the old well-known symphonies. From the viewpoint of Western culture, is this a real garden? Is this art? These are questions that will stir discussion for a long time and there is no simple answer. But one point seems apparent: by introducing the likeness of the Ryoanji to Western New York, the Nannen Arboretum is in effect bringing us one of the famous artworks of the Orient.

The Nannen Arboretum is located at 28 Parkside Drive across from the Ellicottville Fire Department. The site is open to the public 365 days a year from dawn to dusk. Admission is free; donations are gratefully accepted. The main entrance is located at the far end of the Extension center parking lot. Visit the Nannen Arboretum online at www.nannenarboretum.com where you’ll find directions to the site, a virtual tour link, program announcements and more.

« The Lowe Herb Garden at Nannen Arboretum…a Garden in Transition By Pat Kerl » Want to Know a Secret?